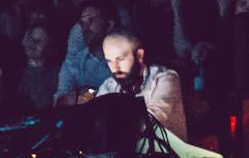 Ber Quinn is one of the most highly regarded sound engineers in the music industry, working with artists such as The Divine Comedy, Villagers and John Grant.

From the day he started in CSN, we remember him as a talented, personable and hardworking musician/engineer with a keen interest in all elements of music and production – and the occasional pun!

Ber was a pleasure to teach because of his natural curiosity about all things musical. He played a central role in what was a ‘golden’ group of students (the class list is too extensive to mention all here, but it’s worth checking out).

We’re delighted with Ber’s ongoing success and proud to number him amongst our own.

Most of my time these days is spent on tour. In the last year, I have toured as front of house engineer for John Grant, The Divine Comedy, Villagers, Lisa Hannigan, Wallis Bird and Little Green Cars.

In the last 12 months, I've toured America, Canada, Japan, China, Australia, New Zealand, Russia, all around Europe a few times and I got to tick a few bucket list gigs off (Royal Albert Hall, Tokyo Dome City, headline a festival).

My job is to mix what the audience hears so I work closely with the artists and represent their artistic vision for what they want their show to sound like. At the same time, I work with promoters and tech crew well in advance of each show to ensure that the technical specifications of each venue meets our requirements.

When I'm not on tour, I run a small recording studio in Dublin called the Snug. It's still early days for the studio but I've had the pleasure of working on a couple of very exciting albums this year. I also got to work on the last Villagers album “Where Have You Been All My Life?” where we went into the legendary RAK studios and recorded a retrospective of the best of the first three Villagers albums completely live, with no overdubs!

I'm so happy to get with some of my favourite musicians in the world. I remember mentioning The Divine Comedy as an influence during my CSN interview 14 years ago and now I get to work with them every day! Before touring with John Grant, I would have said he was my favourite singer of the last few years. So that side of things is very rewarding.

The tough side of touring life is being away for so long. You miss birthdays, weddings, big family occasions and general normal life! I've just returned from nine weeks out on the road, I have a few days off this week and I'm back out on the road again next week. It can be very hard on family and personal life.

Some of the best advice I got whilst in CSN is to focus on as wide a range of skills as possible. It's extremely difficult to make a living just from one line of work these days (and it's only getting tougher!) so it makes sense to be able to sell yourself as somebody who can multi-task. I know many sound engineers who double up as tour managers. I tour, record and teach. You need to know how to make yourself as attractive as possible to potential clients.

When I left CSN, I worked in venues in both Cork and Dublin (mainly Cyprus Avenue and the Button Factory) before I started touring around Ireland with acts like Cathy Davey, Jerry Fish and One Day International. It was only when Villagers started doing well that I got the opportunity to really get working outside of Ireland and that I got to work with international acts such as Givers, Eliot Sumner and Stargaze Ensemble (not to be confused with any band that has CSN tutors in it!)

Have you kept in touch with your classmates? Are they working in the Music industry?:

Yes, I have kept in touch with some of my classmates. Many are still in the industry: running music venues, doing sound and performing! It's great to see people doing what they love.

Did you find your time at CSN beneficial?:

Absolutely! As well as learning the theoretical and practical side of things during my time in CSN, it was instrumental in making those important first connections that got me my first gigs. It also helped that I didn't just study sound engineering and that I got an all-round musical education.