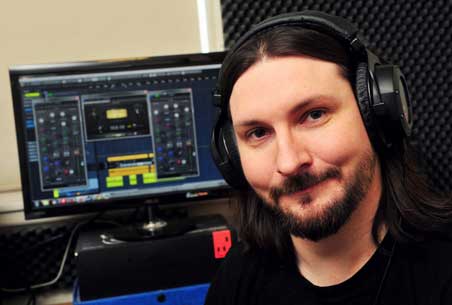 My current job is Miracle Of Sound - a one man musical project covering a diverse range of genres, including rock, jazz, metal, classical, country and electronic. Basing many of my self-produced songs around pop culture such as TV and video-game characters I have built an expanding niche audience through the internet & social media.

As of late 2016 my music Youtube channel has just over 130 million views, averaging about 3 to 4 million views monthly. I have also had an iTunes number one on the metal chart with my album of more personal songs: ‘Metal Up’.

My advice to students of CSN would be to find your niche and pursue it with every waking moment. It’s incredibly difficult to get noticed in the music industry these days and the mainstream music business is at an all-time nadir, full of homogeneous sludge. Get out there on social media instead and get in touch with other artists who make your style, find genres within genres that have pre-existing fan bases you can appeal to and hopefully build a passionate following that way.

Also - do the work. Don’t be lazy and expect things to come to you. It took me over a decade of practice and failure to see any decent level of success and I now often work 60 to 70 hour weeks to keep my dream job. Don’t let rejection & failure discourage you too much - music is too subjective to let one person’s negative reaction over-ride another’s love of your art.

Rakastan, indie band from around 1995 to 2001, with fellow CSN classmate Kilian Pettit.

Lotus Lullaby - Pop rock band from around 2000 to 2007. Featured ex-CSN students Dylan Fitzgerald and John Coman. We won the National Student Award and Murphy’s Live in 2006 before, sadly, breaking up in 2008.

Many theatre soundtracks between 1997 and 2005 with theatre company Boomerang.

Have you kept in touch with your classmates? Are they working in the Music industry?:

I have kept in touch with a few and some have made careers in the industry or in the peripherals around it such as radio & TV.

Did you find your time at CSN beneficial?

Absolutely. In a few ways:

CSN was the first place I learned about MIDI, sequencing and home recording with Rupert & Johnny. This was an invaluable skill for me and it has directly resulted in the ability to record and produce my own work the way I want it to sound - a huge benefit for someone working on a budget creating multi-genre music.

Also, Chris’s advice on the business side, on song structure, on self-promotion and discipline - it was all directly influential on my career.

I’d also probably be a much worse piano player without my brief but fun time in Ursula’s classes!